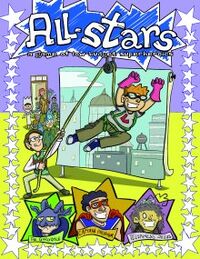 All-Stars is a game released by Hex Games using their own QAGS system which spoofs the superhero genre by placing the players in the role of low-powered "lame" heroes. During development, it also briefly had the very descriptive working title of Super Zeroes.

Paradigm City is known for its heroes, the powerful, colorfully-clad men and women who always swoop in and save the day. You’re not one of those people. Sure, you’re got a power (or at least a schtick), but it isn’t particularly awe-inspiring, or even all that useful. You don’t have a fancy crime-mobile, an ultra-modern headquarters, or a high-priced publicist like the big boys. But you’ve got heart, and sometimes that’s all you really need.

All-Stars is a game of low budget superheroics designed for use with the QAGS Second Edition rules. It includes an overview of Paradigm City, including history, places of interest, and important people; rules for character creation, and for super powers; a guide to creating your super team; GMing advice; sample characters (The Human Spork! Plushy Master! Singing Swordsman!); super-hero naming tables; adventure ideas; and more!

Hex is currently developing a supplemental release entitled Vice Squad featuring a team of low-powered heroes based on classic human vices and sins.

Members of the Quilt City Ogres, who helped playtest the game, are developing a supplemental release that features the characters they played during the playtesting. The release is titled Hall of Cosmonauts after their in-game superhero team name, which is a humorous colloquially misunderstood in-joke.

Retrieved from "https://ogres.fandom.com/wiki/All-Stars?oldid=13361"
Community content is available under CC-BY-SA unless otherwise noted.