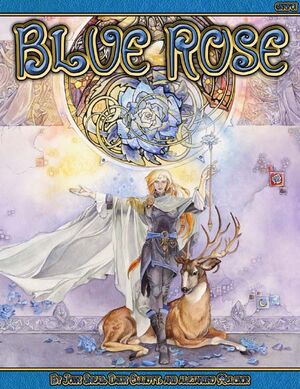 Blue Rose is a fantasy role-playing game published by Green Ronin Publishing in 2005. The game is described as being in the romantic fantasy genre and it is inspired by fantasy fiction such as that of Mercedes Lackey and Diane Duane as opposed to Robert E. Howard–style of swords and sorcery. In romantic fantasy the emphasis is on role-playing and character interaction rather than on combat. This makes for a more social game than is typical for fantasy RPGs. The game uses a lightened version of the D20 system, called True20. Blue Rose won the Gen Con ENWorld Roleplaying Silver Medal for Best Rules in 2005. Green Ronin subsequently released True20 as a separate system without a setting and genre neutral.

Blue Rose is set in a world called Aldea, and most campaigns center around the Kingdom of Aldis. Aldis is a monarchy whose ruler is chosen by divine intervention rather than inheritance. The current ruler is Queen Jaellin, who earned the throne when "the Golden Hart", a being symbolizing rightful rulership, chose her over rival contenders. Populations of sentient telepathic animals are prevalent in Aldis (talking animals are a common theme in fantasy literature, but far less so in role-playing) and are considered equal citizens on par with humans. A significant percentage of the population of Aldis is openly homosexual or bisexual (again, this is unusual by comparison with other fantasy role-playing settings).

By fantasy standards Aldis supports a strongly progressive worldview. Feminism, environmentalism and acceptance of homosexual-transgender lifestyles are strongly implied to be objectively correct. The setting is clearly meant to be the sort of idealized state that players with such sensibilities would choose to defend. However, Aldis is not free of internal strife, including a Mafia-like criminal organization known as The Silence, corrupted nobles and various dark-magic cults.

Aldis endures tense relations with Jarzon, a neighboring realm of intolerant fanatically religious ultra-conservatives fashioned after an extreme version of Evangelical Fundamentalism. Both nations are threatened by Kern, an evil kingdom of necromancers, and have occasionally operated as uneasy allies against the common aggressor.

Upon initial release, Blue Rose was met with general approval and even some acclaim by the gaming hobby. The greatest attention was directed at the rules system, which was praised as a skillful slimming down of the comparatively more cumbersome d20 rules. However, though it had its fans, the setting generally received only passing interest, and a very vocal minority decried it. The mildest complaints alleged the setting was too modern or politically correct in its attitudes for a fantasy setting, while the harshest critics accused the game of promoting a radically liberal agenda, or simply being adolescently moon-eyed and recklessly naive. In many online discussions, Blue Rose was derisively referred to as a "gay role-playing game", even though mention of the homosexual segment of Aldea's population only composes a very small fraction of the book, and does not have a substantial effect on play.

Representatives of Green Ronin have made comments to the effect that the game was originally intended to be targeted at female readers of romantic fantasy, but complications led to it being distributed through traditional gaming distributors instead.

Critics have pointed out that while the setting encourages violence as a solution less than most fantasy games, nonetheless the greater part of the rules govern combat, and there is no detailed social conflict resolution system.

Despite these issues, Blue Rose still debuted largely to acclaim. Three supplemental books were published (in addition to the original core rulebook).

Green Ronin later released True20 as a separate game, without any default setting. The company now treats Blue Rose as one setting for True20 - for example, the Blue Rose forum was abandoned and replaced with a section in the True20 forum.