Camp Oggie (named after Ogswald Theodore Henry Eddington Ogre, aka Oggie the Ogre - the mascot of O.G.R.E.s) is a biannual gaming extravaganza and gaming celebration hosted by O.G.R.E.s. In addition to gaming, the event includes outdoor activities, the annual awards presentations, and public rank advancement. 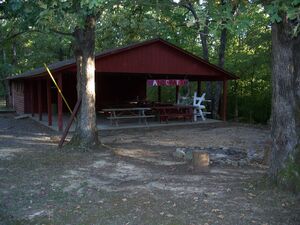 Deadline for yearly Proposals is February 10th of the year you wish to host.
Chapters should contact the Director of Communications by clicking here to learn how to submit their proposals, or via email at hooperjrATgmailDOTcom if they can't utilize the OgreLair form!

Camp Oggie is usually hosted on camping ground, with cabins available and room for those who prefer to pitch a tent. Amenities such as showers depend upon the exact location for each year. Food is purchased and cooked by the host chapter, who provide meals for attendees. Any entrance cost to Camp Oggie is to offset the cost of renting the land and buying the food, and it goes directly to the local host chapter to divide as they see fit among their members.

The camp includes a on-site library of games for pick-up gaming, as well as usually a few scheduled games. Evening campfires (unless a burn ban is in effect in the area) are common, and the weekend long "Camp Oggie Murder Mystery" party game goes on. A new addition to the lineup in 2012 will be the House of Ogswald Amtgard Battle of Camp Oggie, a boffer combat event.

If the land is not a federal location, alcohol may be found. In this event, it is always a byob situation, and those who drink must create a second campfire ring or location to drink so that no minors are even near by.

Smokers must designate a location for smoking, and it should be a location slightly away from the main facilities in order to create a buffer zone between the second hand smoke and the attendees at large.

Any chapter may submit a proposal to host the Camp Oggie on a campsite of their choosing, typically closer to their city of charter, by contacting the Director of Communications and requesting a Proposal Packet. Mostly, the Board of Directors will just need to know a budget to approve for the rental and any cost associated with the location or other amenities, as well as the rules associated with the campsite, such as coed rules and regulations related to alcohol.

The Board of Directors are currently planning for Camp Oggie 2012 to be held in September.

The inaugural Camp Oggie was held in October of 2010 on the grounds of Boy Scout Camp Roy C. Manchester in Kentucky. Information on the event can be found here.

A campout which was held within Land Between the Lakes along the border of Kentucky and Tennessee.

Was joined in with a halloween festival for "Camp Oggieween" and again held in Land Between the Lakes.

Retrieved from "https://ogres.fandom.com/wiki/Camp_Oggie?oldid=14443"
Community content is available under CC-BY-SA unless otherwise noted.