A Chapter (sometimes more casually referred to as a tribe) of O.G.R.E.s is a group or groups of gamers who share the same geographical or digital space and play role-playing games and/or other tabletop games together. 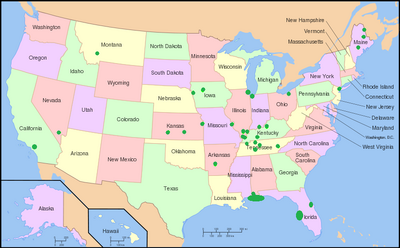 There are four different types of chapter that one may participate in or create. Make sure to put a great deal of thought into what type of chapter will best suit your player’s needs.

The most common type of chapter, a city chapter is based in a particular city and most of its members are residents of that city or surrounding areas. These players will usually meet in person at pre-determined places and times to play, and recruitment for new members is usually done at local gaming and comic shops, or other demographically appropriate places. A variant of a city chapter is a regional chapter, where the members identify with a greater region consisting of numerous cities or towns.

A church chapter is centered around a particular church or temple or other religious worshiping center, and is populated by members of that particular congregation. The group may simply be a social group of the church for simple family-friendly fun games, or may actually be a fellowship tool of the church with a youth pastor of game master that runs a faith game. Faith games are Role-playing Games ran through a campaign, typically made by the GM, that help reenact stories from the congregation's holy book (i.e. Bible) or as other ways to put the players into situations where they have to roleplay a character through crisis of faith. If a chapter exists within the same city, or at a nearby school, they could share an "ambassadorial" member or members between each other. Church chapters that exist within a religion that does not call their worship center a church, such as the Jewish Synagogue or the Islamic Mosque will be titled accordingly.

Lastly, the least common type of chapter is the Cyber Chapter. A cyber chapter exists entirely of internet-gamers, usually of members who routinely play together by email or forum. A cyber chapter is a much more loose chapter – but may accept the Ogre moniker for recruitment and brand purposes. Members of a city or school chapter may also participate in online-only games with other cyber chapters, but their “main” membership will always be considered a physical chapter.

Forming a new O.G.R.E.s Chapter is an intensive process commensurate with the commitment that a new Chapter Coordinator is making to O.G.R.E.s members. By taking on a Chapter, you're committing to providing regular events according to the schedule that you set, and to provide a fun and welcoming environment to your regional gamers. You'll have a staff to manage, plot to coordinate, and players to entertain. It's no small task, but we're here to help.

Please see the New Chapter Portal to get directions and assistance on founding a new chapter of the Organization of Gamers & Roleplaying Enthusiasts.

To search for a chapter or view chapters by region and location, utilize the Chapter Portal

Back To: Ogres Wiki → Organization of Gamers & Roleplaying Enthusiasts

Retrieved from "https://ogres.fandom.com/wiki/Chapter?oldid=13965"
Community content is available under CC-BY-SA unless otherwise noted.