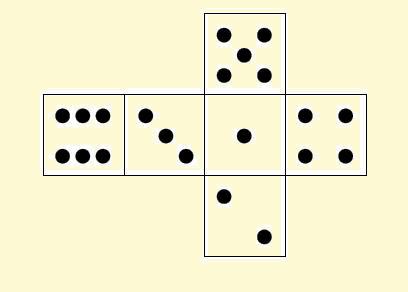 Characters in the D6 System are defined by attributes and skills. Attributes represent the raw ability of a character in a certain area. Most D6 System games utilize anywhere from six to eight attributes, though these can vary greatly in number and name by the game in question. Acumen, Intellect, Knowledge, Perception, Presence and Technical are examples of mental attributes; Agility, Coordination, Mechanical, Physique, Reflexes and Strength are examples of physical ones. Skills are the trained abilities of the character and are associated with a specific attribute (e.g., driving, acrobatics, and climbing might be skills based on the Reflexes attribute). Each attribute and the skills under it are rated in values of Dice and Pips; Dice equal the number of dice rolled and Pips equal a one or two point bonus added to the roll to determine the result. The more dice and pips in the rating the better the character is at that skill or attribute. A character with a Strength rating of 4D+2 is stronger than a character with a Strength rating of 3D+1, for example.

Character actions are resolved by making dice rolls against a difficulty number. There are two types of difficulties, standard and opposed. To perform a standard difficulty action, the gamemaster calls for the player to roll the dice for a certain attribute or skill. The value of each die is totalled and the pips are added to the die roll to get a total. This total along with any GM or system imposed modifiers is compared against a target difficulty number. To perform an opposed roll action, the two parties involved (usually the player and a gamemaster controlled character) both roll their appropriate skills dice, total them and any modifiers and compare the results. If the first party's roll is higher than that of the second, he wins the contest and the rest of the result is resolved. If the second party equals or exceeds his opponent's roll, then the second party wins the contest.

One of the dice rolled for each skill or attribute check or for damage is considered to be the "wild die", and is treated somewhat differently than the other dice. If a six is rolled on the wild die, then the die "explodes" allowing the roll of an additional wild die. The resulting sixes are added to the total, and the roll continues as long as the player continues to roll sixes on the wild die. If a one is rolled on the wild die during the initial roll (not after a six is rolled), and another one is rolled in the second roll, a critical failure or complication occurs, usually with bad results for the character. If a number other than one is rolled after an initial roll of one, then that die, and the one with the highest number are subtracted from the roll's total. Use of the wild die tends to make the game feel more cinematic.

Most D6 System game use the resolution system described above, which is sometimes called The D6 Classic System, though some variants exist. In one variant, The Legend System, instead of adding the die totals up, the dice showing 3, 4, 5 or 6 are each counted as a success. Use of a skill requires rolling a certain number of such successes. Pips are not used in the Legend System. This variation of the system was referred to, in jest, as "The D6 variant for the mathematically challenged" on WEG's own discussion forum. The Legend System has been utilized in the Hercules & Xena Roleplaying Game and the Universe Roleplaying Game. Other variants, such as those featured in the Star Wars Live Action Adventure Game and the Star Wars Miniatures Battles game, involve rolling a single six sided die and adding the result to a skill or attribute. This total is then compared to a difficulty number, as with the other variants.

A precursor to the D6 System first appeared in Ghostbusters: A Frightfully Cheerful Roleplaying Game, designed by Chaosium alumni Sandy Petersen, Lynn Willis and Greg Stafford, which was published by WEG in 1986. The following year, Greg Costikyan, Curtis Smith and Bill Slavicsek reworked elements from the Ghostbusters game into Star Wars: The Roleplaying Game. For a decade, West End Games published over 120 titles for the Star Wars Universe including a magazine, The Star Wars Adventure Journal.

In 1996, WEG released The D6 System: The Customizable Roleplaying Game, written by George Strayton, which was the first core D6 System book not tied to a specific licensed property. Allowing a fair degree of variation in attributes and skills between individual games, the D6 System book shared as much in common with the role-playing game toolkit Fudge as it did with other universal systems like GURPS. WEG followed the D6 core book with Indiana Jones Adventures (a reworking of the earlier MasterBook setting) and the stand alone Men in Black RPG. Another licensed game, the Hercules & Xena Roleplaying Game was the last title released by the original West End Games before their bankruptcy, as well as the first to use a modified D6 System based resolution engine that would later be known as the Legend System. A half-finished draft of a D6 System based Stargate SG-1 role playing game remained unpublished as a result of the bankruptcy.

Following the bankruptcy, WEG was merged with French company Yeti, a subsidiary of Humanoids Publishing. Most of WEG's earlier licenses were terminated at this point, but the reconstituted company acquired another one from DC Comics. This license resulted in a new Legend System game, the DC Universe Roleplaying Game, which released a few titles from 1999 until 2001. As Humanoids Publishing was the publisher of the Metabarons graphic novels, they utilized the D6 System to release an RPG based upon that setting. Ron Fricke and former WEG publisher Scott Palter's Psibertroopers, the first licensed third party D6 System product, also saw release during this period. Humanoids began the process of releasing PDF format versions of many of the earlier WEG titles, converting some to the D6 System in the process. Humanoids released a PDF version of the Shatterzone Universe Guide containing an early version of D6 Space Opera. An initial PDF version of D6 Adventure was released as a rules lead in for the eventual re-release of Bloodshadows.

In November 2003, shortly after the PDF release of D6 Adventure, the WEG assets changed hands once again. The new owner, Purgatory Publishing, re-released the game in the form of three hardcover rulebooks. The rulebooks, each written by Nikola Vrtis, were actually three separate games. Each shared the same core mechanics, but utilized different attributes, skill sets, equipment lists and power systems. D6 Adventure, an expanded hardcover release of the earlier PDF, covered wild west, pulp, espionage, low-powered super heroes, and other modern or near modern games. D6 Space shared much in common with the earlier Star Wars line, and detailed space opera and cyberpunk game rules. D6 Fantasy dealt with sword & sorcery, high fantasy and swashbuckling campaign models. Khepera Publishing's licensed D6 System super hero game Godsend Agenda was released shortly thereafter. In 2007, WEG announced Septimus, a new standalone D6 System game with a setting designed by Bill Coffin and a rules system paralleling that of Star Wars: The Roleplaying Game. Near the end of the year, WEG publisher Eric Gibson tentatively announced that the D6 System would soon be adopting a free license. At the end of the month of March, 2008, West End Games announced that the "Septimus" product would not be released due to cost issues. Plans for OpenD6 are still in the works. In August of 2009, West End Games released most of the 51000 series of D6 book with attached OGL license officially classifying them and the D6 System as Open under the OGL v1.0. This re-release was in anticipation for a formal launch of the OpenD6 website portal and workstation, meant to aid publishers and players alike in creating, archiving, and searching the wealth of D6 rules and variants. Additionally, August 13th 2009, saw the long awaited release of Bill Coffin's Septimus which itself was the first formal release of new material under the OpenD6 label.

Retrieved from "https://ogres.fandom.com/wiki/D6_System?oldid=9336"
Community content is available under CC-BY-SA unless otherwise noted.