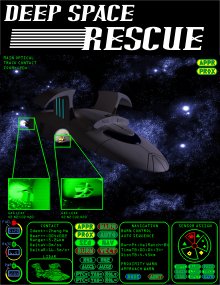 Deep Space Rescue is a science-fiction futuristic role-playing game released by Hex Games for use with the QAGS system.

Over 300 years in the future, humanity is spread across a hundred star systems. The Conclave Expeditionary Force keeps the peace. You work for the CEF's Deep Space Rescue division, answering cries for help, investigating abandoned hulks, saving survivors from catastrophes. Now you're responding to a distress signal from the scout ship Zheng He. It seems like a simple enough job, but before it's over you'll encounter aliens, space pirates, and plasma cannons. In fact, there's a good chance you won't make it back alive.

Deep Space Rescue is an action-packed science fiction adventure for use with QAGS, the Quick Ass Game System. It can be played as a one-shot mission, as an add-on to an existing game, or as the beginning of a full-fledged campaign.

Retrieved from "https://ogres.fandom.com/wiki/Deep_Space_Rescue?oldid=9737"
Community content is available under CC-BY-SA unless otherwise noted.