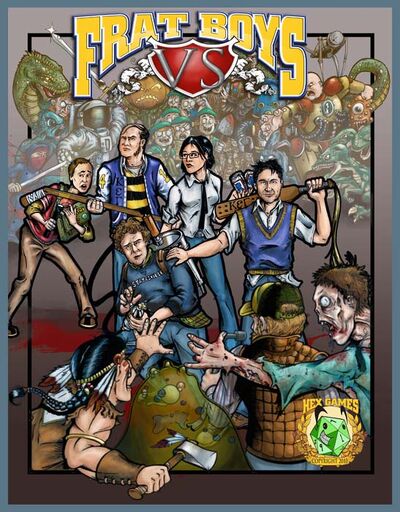 Fratboys Vs is a Hex Games product utilizing the QAGS system that puts in the players into the role of fictional fraternity brothers, pitted against various foes. It is one of the releases in their Vs line.

It’s a typical day at Kappa Epsilon Gamma house: music blaring, beer flowing, and the party starting in half an hour. Suddenly, zombies attack! Or maybe Nazis. Or robots, or dinosaurs, or aliens, or ninjas, or cyborg gorillas, or pirates . . . the details vary. The point is, it’s time for some serious ass-kicking.

Fratboys Vs. is an adaptable adventure for use with the QAGS system. Players take on the part of fratboys, and fight a different menace every time you play. Fratboys Vs. includes background and setting information about Kappa Epsilon Gamma, Statesville, and State U.; information on creating characters and some popular fratboy archetypes; an overview of the typical Fratboys Vs. plot outline, along with ideas on adapting Fratboys Vs. to campaign play; examples of specific enemies for the fratboys to fight, including tips for adapting the plot to the villains in questions, ideas for exciting scenes and plot complications, and game information about the villains; and appendices featuring fratboy-related dumb tables and inspirational materials.

Fratboys Vs. is written by QAGS co-creator Steve Johnson and handsomely illustrated by Jeffrey Johnson.

Retrieved from "https://ogres.fandom.com/wiki/Fratboys_Vs?oldid=11696"
Community content is available under CC-BY-SA unless otherwise noted.