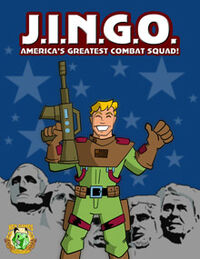 It's 1985. After a landslide election, Ronald Reagan has just started his second term, and America feels awfully good about itself. Unfortunately, there’s a new threat out there, more dangerous than the USSR, Libya, and Iran combined—M.U.S.K.R.A.T, the Militant Union of Saboteurs, Killers, Renegades, And Terrorists. To combat this threat, Mr. Reagan has created an elite anti-terrorist force, the Justified Intelligence Network of Gifted Operatives. That’s right, J.I.N.G.O.! When extraordinary circumstances call for extraordinary operatives, J.I.N.G.O. is there to protect the U. S. of A. from terrorists, communists, or whatever else threatens this great land of ours.

Recreate the thrills of your favorite toy-based cartoons from the 80’s with J.I.N.G.O. - America’s Greatest Combat Squad! J.I.N.G.O. is designed for use with the QAGS system. It includes background on J.I.N.G.O. and M.U.S.K.R.A.T.; new rules for Specializations, Firepower, and Q Rating; vehicle rules; sample characters, vehicles, Gimmicks, and Weaknesses; 20 adventure ideas; and more!

Retrieved from "https://ogres.fandom.com/wiki/JINGO?oldid=11710"
Community content is available under CC-BY-SA unless otherwise noted.