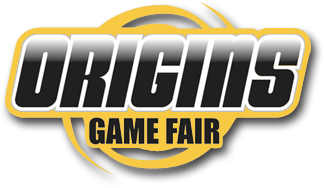 The Origins Game Fair, sometimes known simply as Origins, is one of North America's most prominent annual gaming conventions, second in size only to Gen Con. Origins takes place each year in Columbus, Ohio at the Greater Columbus Convention Center, in late June or early July.

Origins is run by The Game Manufacturers Association (GAMA) as one of their two shows for the gaming industry. (The second show, the GAMA Trade Show, is for game manufacturers and retailers only.) Origins is specifically chartered to serve gaming in general, including wargames and miniatures gaming, which tend to be less well represented at Gen Con and Dragon*Con. Board games, trading card games, LARPs and role-playing games are also popular at Origins.

Origins is the site of the annual Origins Awards ceremony. For many years, the Charles S. Roberts Awards for historical boardgames were presented at Origins, but these are now presented at the World Boardgaming Championships.

Origins Game Fair was formerly known as the Origins International Game Expo. The name was changed in the summer of 2007.

Origins started in 1975 with a gathering of game players in Baltimore, Maryland. The Interest Group Baltimore, a local wargaming club, worked with the Baltimore-based Avalon Hill game company to put on the first show that year at Johns Hopkins University.

Avalon Hill produced the first commercial war games back in 1958. In a nod to Baltimore's position as the home of Avalon Hill and the birthplace of the commercial wargame hobby, Don Greenwood, a game designer with Avalon Hill and founder of the convention, suggested calling the show "Origins". Over the next few years, both Avalon Hill and Simulations Publications (another wargame company) ran the show. As the show continued expanding, the Game Manufacturers Association assumed management in 1978.

In 1988, Origins and Gen Con joined forces to hold a single convention in Milwaukee.

Throughout most of its life, Origins migrated from city to city, but this limited the show's growth. In 1996, GAMA decided to anchor Origins in a single location. After considering a number of possibilities, GAMA chose Columbus, Ohio. With its proximity to many attendees and show volunteers, Columbus promised a fertile environment. The decision proved wise, as Origins continued to grow in subsequent years. In 2005, the show set another attendance record with just over 15,000 attendees (as announced on the Origins website).

Back To: Ogres Wiki → Organization of Gamers & Roleplaying Enthusiasts → Calendar of Events

Retrieved from "https://ogres.fandom.com/wiki/Origins_Game_Fair?oldid=11314"
Community content is available under CC-BY-SA unless otherwise noted.