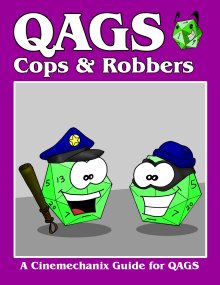 QAGS Cops & Robbers is a role-playing game released by Hex Games, which utilizes their QAGS system.

Nearly every kid in the world has played "Cops & Robbers" at some point. When we're young, crime stories are very basic and the line between good guys and bad guys is clearly defined. As we get older, the stories become more morally ambiguous. Because crime stories at their most basic are about the difference between Right and Wrong, the genre is rife with role-playing possibilities.

Cops and Robbers: A Cinemechanix Guide for QAGS provides GMs and players with extensive information about the crime fiction genre, including types of stories, common character archetypes, genre tropes, and QAGS mechanics for handling common situations like car chases, Mexican stand-offs, breaking and entering, and interrogation. This book is not intended to be a nut-and-bolts guide to criminal activity or police work, but a useful resource filled with possibilities for your game.

Retrieved from "https://ogres.fandom.com/wiki/QAGS_Cops_%26_Robbers?oldid=11267"
Community content is available under CC-BY-SA unless otherwise noted.