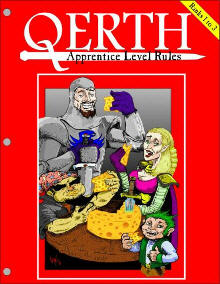 Qerth (rhymes with worth) is a fantasy role-playing game setting published by Hex Games for use with second edition QAGS system. The Qerth Apprentice Level Rules book introduces players to the Qerth setting, explains the intricate mechanics of Qerth, and gives rules for character Ranks 1-3. This book focuses on dungeon adventures, because they are the center of Qerth's economy and culture. You will need QAGS Second Edition (or the QAGS Qik Start rules, included in the PDF) and several handfuls of dice to play Qerth.

Retrieved from "https://ogres.fandom.com/wiki/Qerth?oldid=9733"
Community content is available under CC-BY-SA unless otherwise noted.