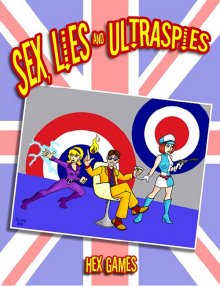 Sex, Lies, and Ultraspies is a role-playing game released by Hex Games for use with their QAGS system.

Welcome to 1960's Britain, where everyone is trying not to think about the bomb, women are liberated and wearing skintight leather catsuits, and there are always mixed drinks on hand. You’re a secret agent, but there’s nothing secret about you. You wear the latest fashions, operate the latest high-tech gizmos, and drive the fastest cars. You drink your martinis shaken, not stirred. You assault secret bases in the middle of volcanoes. You even have powers and abilities beyond those of mortal humans. You’re a super-powered super-spy, protecting Queen and Country and looking good while you do it.

Sex, Lies and Ultraspies uses the QAGS Second Edition rules. It includes extensive background information on Ministry Q, Britain’s paranormal spy agency, as well as descriptions of 16 rival agencies; discussion of the British spy genre, and tips on how to create the right feel in your games; rules for creating super-powered agents; “Hard Week’s Night,” a thoroughly fleshed-out multi-part adventure; and sample characters and tables useful for creating your own adventures.

Sex, Lies and Ultraspies gives you espionage action that’s both shaken and stirred!

Retrieved from "https://ogres.fandom.com/wiki/Sex,_Lies_and_Ultraspies?oldid=9726"
Community content is available under CC-BY-SA unless otherwise noted.