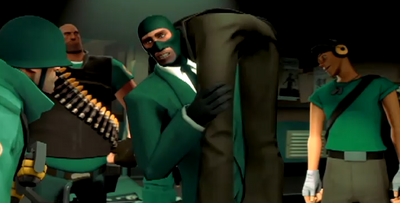 Team Fortress 2 is a multiplayer, team-based, first-person shooter, developed by Valve Corporation as part of the game compilation The Orange Box. It was released for Microsoft Windows, Xbox 360, PlayStation 3 in 2007, and released later as stand-alone retail in 2008. The PC release of Team Fortress 2 adopted a "Free to Play" model on June 23, 2011 with all revenue gained through microtransaction payments of items from the Mann Co. Store. Members of the O.G.R.E.s play the game, mostly via PC, and can be found via their steam group.

The lack of information or apparent progress for six years of the game's development caused it to be labeled as vaporware, and it was regularly featured in Wired News annual vaporware list among other ignominies. The game has received critical acclaim and several awards since its release.

Like its predecessors, Team Fortress 2 is built around two opposing teams competing for an objective. These two teams are meant to represent a demolition and a construction company: Reliable Excavation Demolition (RED) and Builders League United (BLU). Players can choose to play as one of nine classes in these teams, each with their own unique strengths and weaknesses. Although the abilities of a number of classes have changed from earlier Team Fortress incarnations, the basic elements of each class have remained.

Team Fortress 2 is the first of Valve software's multiplayer games to incorporate detailed statistics for players. These statistics include the time spent playing as each class, average point score and the most captures or objectives achieved in a single round. (See Valve statistics.) Persistent statistics tell the player how they are improving in relation to these statistics, such as if a player comes close to their record for the damage inflicted in a round. Team Fortress 2 also features numerous achievements for carrying out certain tasks, such as scoring a certain number of kills or completing a round within a certain time. New sets of class-specific achievements have been added in subsequent updates, which add new abilities and weapons to each class once unlocked by the player. Achievements unlocked and statistics from previously played games are displayed on the player's Steam Community or Xbox live profile page.

On the PC version, the game ships with a number of official maps released by Valve along with several community developed maps. On the console version, however, there are six maps, all released by Valve. The official maps are commonly themed with an evil genius mentality, with secret bases being concealed within industrial warehouses and exaggerated super weapons such as laser cannons and missile launch facilities taking the role of objectives.

When players join a map for the first time, an introductory video shows how to complete map objectives. Map player limits are 24 on the PC, although the player limit has been altered on some servers to reach as high as 32, and 16 on the Xbox 360 and PlayStation 3.

Retrieved from "https://ogres.fandom.com/wiki/Team_Fortress_2?oldid=11685"
Community content is available under CC-BY-SA unless otherwise noted.