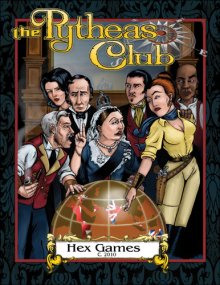 The Pytheas Club is a role-playing game released by Hex Games, which utilizes the companies own QAGS system.

The year is 1877, and you are one of the Pytheans, an elite group of British gentleman adventurers doing their part to advance the cause of Crown and Empire. No matter what the challenge, no matter what the opposition, you must and will keep a stiff upper lip and see the mission through. The Empire is counting on you.

The Pytheas Club is a Victorian adventure game designed for use with the QAGS Second Edition rules. It includes the history of the Pytheas Club; a description of the club building, officers, and staff; rules for character creation; sample PCs; guidelines for creating adventures; a sample adventure, “The Pytheas Club vs. the Big Bird”; and appendices containing indispensable information on gentlemen’s clubs, whist, and other vital aspects of the Victorian era.

The Pytheas Club is written by noted Anglophile Mr. Ian Engle, with a stunning cover by the illustrious Mr. Jeffrey Johnson.

Retrieved from "https://ogres.fandom.com/wiki/The_Pytheas_Club?oldid=10867"
Community content is available under CC-BY-SA unless otherwise noted.